Smiggin Holes is of Scottish origin. The trampling of hundreds of cattle consuming rock salt that graziers had placed there, caused depressions that filled with water. These depressions were called "the smiggin holes".

1939 signified the start of Smiggin Holes as a destination for skiers. A cafe was established to service skiers en route to Charlotte Pass and Mt Kosciuszko.

The method of travel in those days consisted of horse drawn sleighs to Smiggin Holes, then arduous journeys oversnow on skis to The Chalet at Charlotte Pass. As the number of skiers increased, services, facilities and means of access were improved, and Perisher's first lodges were constructed. Telemark and the Kosciusko Snow Revellers Club being completed in 1952. In the winter of 1953 the first oversnow transport operated to Perisher Valley. It was greeted by the inhabitants with cheers and celebrations.

In 1958 Sverre Kaaten, another pioneer of the mountains, built a sophisticated rope tow at North Perisher. Johnny Abbottsmith ran a tow where the Telemark T-bar is now situated and Cooma Ski Club had a rope tow just past where the Quad Chair Middle Station lies.  Ken Murray, an old friend of Sverre's built Perisher's first T-bar. Development continued and Mt Perisher Double Chair was opened in 1961. After the opening of the first chairlift, T-bar expansion and rope tows, the Perisher area thrived. Murray Publishers Pty Limited was taken over by Australian Consolidated Press in 1972 and Kosciuszko Alpine Resorts was formed. 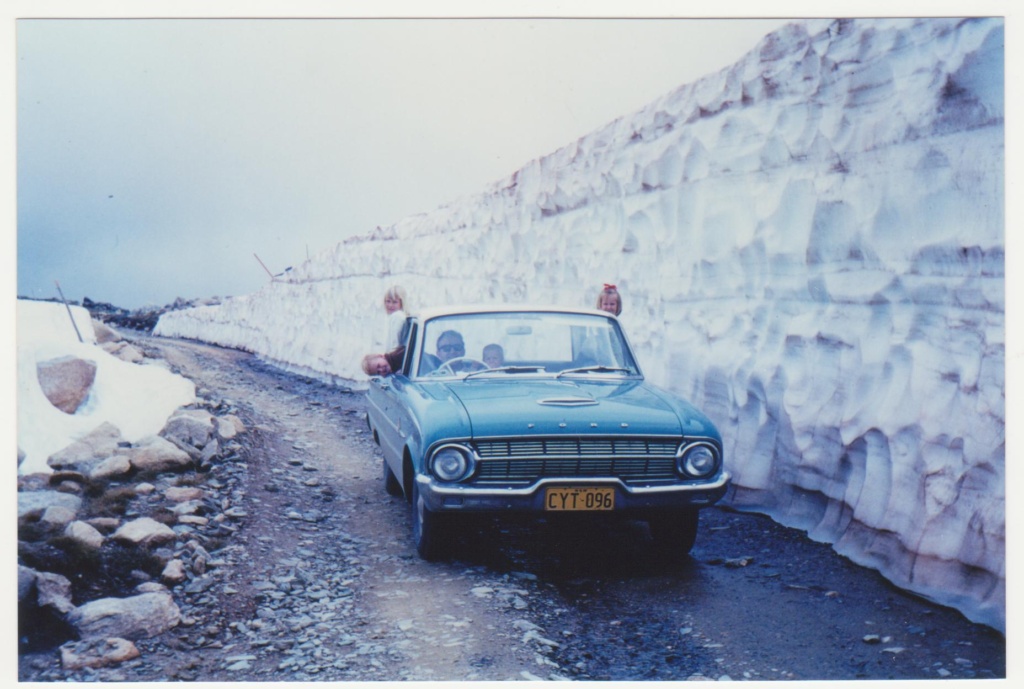 The Irvine family on the road between Sponars and Smiggin Holes in 1969.
L-R David, Karen, Bob (driver), Melissa, Narelle

You don't see walls of snow like this anymore!