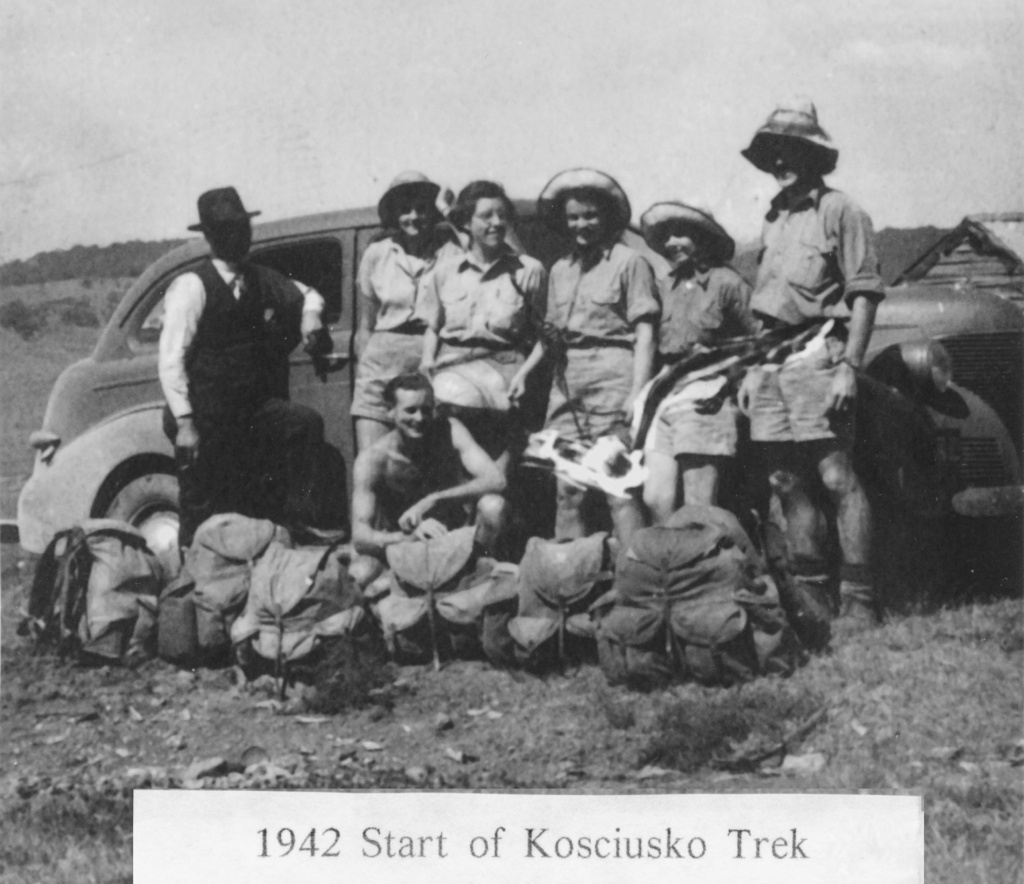 Fifty one years ago six members of the Coast and Mountain Walkers arrived in Cooma after a long journey on the overnight Cooma Mail. The Railway Refreshment Room served a hearty breakfast most welcome after a sleepless night.

Frank Yen was waiting with his Mail Car to take us to Kiandra on the then rough and dusty road, stopping only to buy some lamb chops at the Adaminaby butchery, an activity which sent millions of flies waiting outside into a state of frenzy. One of the twelve inhabitants of Kiandra waved goodbye as we shouldered packs and set off with our crude sketch map.

We camped near Farm Ridge Huts where we were welcomed by cattle and sheepmen with their wives and many dogs, and given lemon syrup and biscuits. At the Bogong Hut (pronounced Boogong) we met stockman Jim Murray, a neighbor from Boobee and a cattleman from Round Mountain. We were told that at sundown a beast was to be killed. The animal, as three year old Hereford, was to provide meat for a few folks around. Lance Turton and I were determined to see this. Standing in the perishing wind, in the shadow of the Big Bogong, we saw the job done, helped with the hanging of the meat, and received four pounds of the best steak for our efforts. Stockmen arrived next day to take their share of the meat.

Mawson Hut was reached after a walk through the Grey Mare area. The hut was occupied by stockmen Lindsay Willis and Arthur Harris. They remembered the visit of an earlier CMW party – Trevor Krok, Daphne Ball and Beryl Heather who walked from Kiandra to Kosciusko about 1935. The hut was the same then as it is today except for the array of saddles, pack saddles, harness, dingo traps, sheepskin rugs etc and the keg of salted-down meat which together with damper provided the staple diet when fried, boiled or stewed. The hut was also known as the Bobundra Hut after the station near Dalgety,  Mawson I believe being the head stockman.

Lindsay and Arthur the next day took our rucksacks on pack horses and led us most of the way over the Kerries to White’s River. As the weather was becoming threatening for the first time on the trip, we decided to camp in the hut. On a wall was Beryl Heather’s poem “Riders of the Range” cut from a local newspaper and now quite yellow. It was better known to the mountain men than “The Man from Snowy River”. A stockman arrived at night with his dogs – I think his name was McPhee.

And so we went on over the Main Range, camping near Foreman’s Hut (a good hut). Finally after Kosciusko and Townsend we took to the road past the Chalet with its corral – brumbies were herded in there at times. Balmain’s Bus was boarded at the Hotel, travelling over the fine old Snowy Bridge, now submerged at Jindabyne, a sleepy town with hitching rail, then on to Cooma. The dreaded night train was boarded – the only way to travel in those days.

Members of the CMW (Coast and Mountain Walkers) party were: