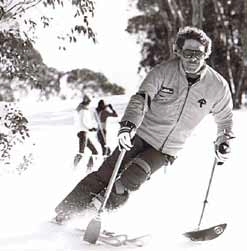 A 35 year journey of success and achievement

In December 2009, Ron Finneran retired as National Executive Director of Disabled WinterSport Australia (DWA) after 35 years of pioneering, encouraging and promoting winter sport for people with disabilities.  Not only was Ron responsible for the introduction of disabled skiing into Australia, he has been the driving force behind the growth of the sport.  No facilities or equipment were available to the disabled when Ron made his first visit to the snowfields in 1974.  He was only able to sit on a rock in the sun and watch his able-bodied friends fly past on skis.  From that day on, nothing has deterred him in his efforts to bring the joys of skiing to those with disabilities.

Together with Thredbo ski instructor Bruce Abel, Ron founded the Australian Disabled Skiers Federation (ADSF) in 1978, with the goal of making participation in winter sport available to all Australians with disabilities.  Ron was elected as first President of the ADSF at the inaugural meeting in the Piano Bar in Thredbo and has served as National executive Director since 1984, making him the longest serving professional administrator in disabled sport.

Ron, however, has been much more than an administrator; he is a proud Paralympian and a pioneer of the International Paralympic movement.  As the only Australian at the first Winter Paralympic Games in Ornskoldsvik in Sweden in 1976, he won the hearts of the locals but was disappointed to be disqualified from competition because he didn’t fit any of the existing categories; instead he was the forerunner for his events.  Subsequently he was Chef de Mission of Australian Winter Paralympic Teams in 1984, 1988, 1992 and 1994.

Ron’s work in developing training programs, talent recognition and his personal support for budding skiers has been a major factor in Australia’s success in international competition; we are now ranked fifth in the world in alpine skiing for the disabled and DWA membership includes two current world champions.

Another achievement due largely to Ron’s vision and determination is Finsko’s Lodge at Jindabyne, which provides accommodation for people with disabilities, their families and friends in a specially designed facility.

Through his charismatic personality and dogged determination, Ron has earned not only the thanks of disabled skiers but also the respect of government officials and strong support from the management of all ski resorts, their ski schools, the commercial ski industry and many sponsors and supporters.  This respect extends to the international ski officials with whom he has worked for years.

Ron’s experience and enthusiasm were recognised in 1993 when he was elected President of the Australian Paralympic Federation and became Chairman of Sydney’s successful bid for the 2000 Summer Paralympic Games.

In 2002, Ron was awarded the Australian Paralympic Medal and this honour was followed by the Order of Australia Medal in 2004.  In 2005 he was inducted into the Sport Australia Hall of Fame.  All these awards recognised not only his efforts to advance disabled skiing but his work across the whole spectrum of disabled sport to gain for our disabled athletes the benefits enjoyed by the able bodied.