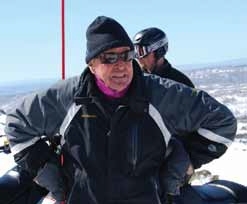 In 2009 Grant Turnbull, known to many as ‘Shifty’, notched up 50 consecutive winter seasons in the Snowy Mountains. In recognition of his committed service to ski patrolling and ski instruction at Perisher, ‘Shifty’s Run’ has been named in his honour.

Grant commenced skiing in 1959 at Charlotte Pass where he stoked the boilers at The Chalet, before becoming Perisher’s first professional ski patroller. In 1970 he began work as a ski instructor and today, at the age of 80, he’s still at it. Unlike many who return to warmer climes in the off-season, Grant has pursued at least 30 back-to-back winter seasons by instructing at the Soll Ski Resort in Austria.

Originally a Bondi surfer, Grant decided to try skiing and has never looked back in the snowsports industry that he helped to shape. A love of meeting and communicating with people and a sincere interest in fostering one’s best abilities in learning to ski makes Grant a deserving recipient of this honour.

Grant’s good looks earned him a modelling role and as can be seen from this image of him used in a book of knitting patterns.

‘Shifty’s Run’ was officially opened on Friday 28 August 2009 and is located skiers right off the top of Eyre T-bar on Mt. Perisher. As for the colourful nickname, ‘Shifty’, it has been suggested that it derives from his days as a ladies’ man, a connotation that Grant adamantly denies!

The much-loved Grant “Shifty” Turnbull died February 2021.  A celebration of his life to be known as “Shifty’s Last World Tour (Part 2)” will happen in Perisher with his ashes to be scattered on “Shifty’s Run” 17 July 2021.