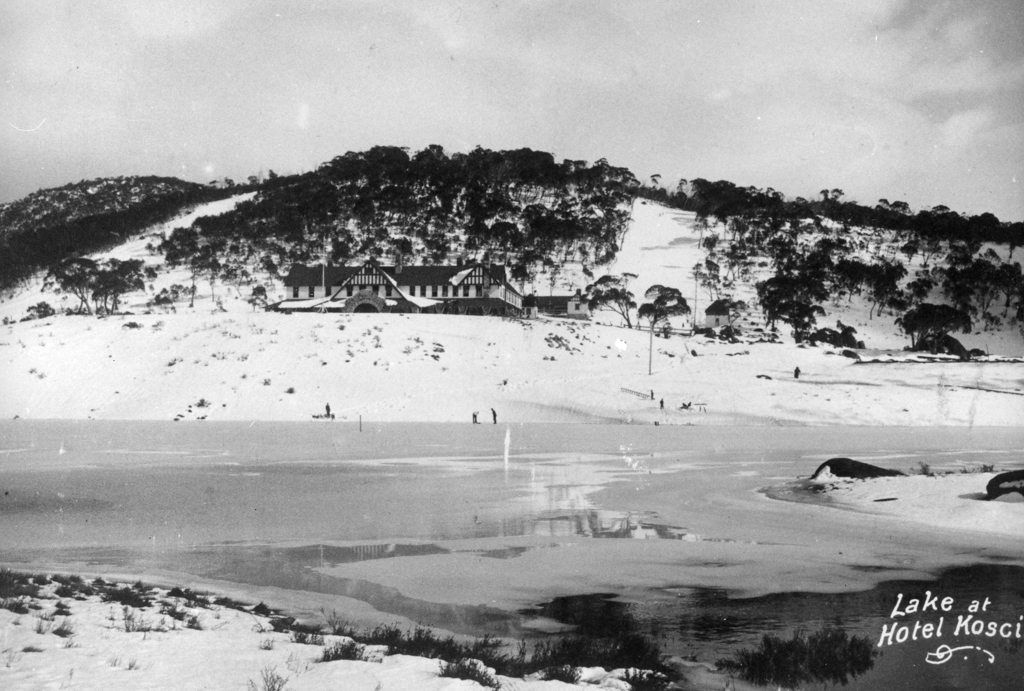 Percy Hunter, whilst Secretary to the first Federal Agent General in London, had seen the ski fields of Switzerland and recognised their tourist potential. Returning to Australia in 1905 he was appointed to the NSW Department of Intelligence and Tourism and the following year skied at Kiandra becoming an immediate convert to the sport.

Hunter suggested to the Joseph Carruthers Government of NSW that it erect a Hotel in the Kosciusko area to promote winter tourism. The Hotel Kosciusko opened at Diggers Creek in 1909 and remained the headquarters of skiing in NSW until the Chalet opened at Charlotte Pass in 1930.

The gently sloping area around the Hotel lent itself to the development of many pleasant ski runs for the skiing standards of the time. Between the Hotel and Dainer’s Gap there were the Grand Slam, the Vernon Course, the Kerry Course the Golf Course, the Bell Run, the Percy Pearson Run, the Gates of Heaven and the Plains of Heaven. The Kerry Course served as the main downhill run for races until 1930.

A variety of skiing historical events occurred at the Hotel between 1909 and 1930 such as the first winter ascent of Mt Kosciuszko along the Kosciuszko Road, the Summit Badge and Summit Competition, skiing proficiency tests, the Australian Championship, turning competitions, exploration of the Main Range, the first winter traverse from Kiandra to the Hotel Kosciusko, formation of a number of ski clubs and the start of the Kosciusko Ski School.

In 1928, the Hotel witnessed the first skiing tragedy in Australia when Laurie Seaman and Evan Hayes perished near the summit of Mt Kosciuszko. It became clear that the Hotel was too distant from the event for easy organisation of search and rescue parties and this led directly to the construction of the Chalet at Charlotte Pass in 1930.

Following the opening of the Chalet at Charlotte Pass, the Hotel Kosciusko declined in popularity although many ski clubs would book a week for their members at the Hotel followed by a week at the Chalet.

In 1951 the predominantly wooden Hotel burnt to the ground leaving only the massive concrete staff quarters building.

The NSW Government put a roof on the staff quarters building to help protect it from the weather but it remained unused until Tony Sponar took over the lease in 1959 and, with his wife Elizabeth, converted it into Sponars Lakeside Inn which has passed through several subsequent owners and has been a successful business.