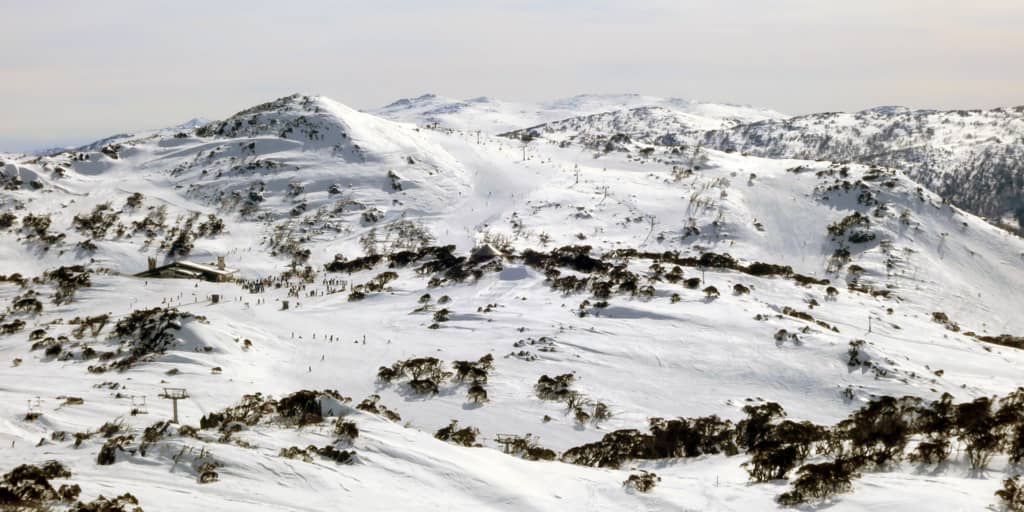 Some time after 1840 James Spencer, a grazier, obtained the lease for all the high country on the main range, including Kosciuszko and Blue Cow peaks. His homestead was situated at West Point (now known as Waste Point) near the entrance to Kosciuszko National Park.

Apparently Spencer crossed some imported black English Shorthorn cattle with white Shorthorns, obtaining offspring with blue roan coats. Blue Cow Mountain was named after one of these cross-bred cows, which would disappear after the thaw each year and would invariably be found on the mountain before the next winter.

In 1968 National Parks and Wildlife Service (NPWS) commissioned Tony Sponar to do a survey for a possible new ski resort. After an extensive study he concluded that Mt Blue Cow would offer the best option and drew up a detailed map of ski runs and two potential villages, a residential one about the bottom of the current Excelerator Run and a second where the Blue Cow restaurant now stands.

Nothing further happened for 10 years until the increasing skiing population was demanding new facilities. NPWS was forced to act and asked for expressions of interest in constructing a new residential resort.  At the time, the NSW Ski Association was promoting Twin Valleys at Thredbo as the best option and several other lesser options while Blue Cow was also in the mix.

Transport into the National Park was also causing major problems at the time and NPWS was seeking a solution for that as well.

Ken Bilson came up with a plan which would allow NPWS to solve both problems at once.  He proposed a railway from the Alpine Way at Bullocks Flat through the Crackenback Range into Perisher which would provide all-weather transport into Perisher Valley.  NPWS realised that, by extending the railway to Mount Blue Cow, it could have a new day-only resort there as well. NPWS cancelled all previous tenders and requested new ones for a non-residential, day-only resort.

Today… Blue Cow includes the facilities of Blue Cow Resort Centre at 1905m and Guthega Ski Centre at 1640m. The highest lifted point on the Blue Cow Side of Perisher is 1960m reached by the Summit Quad Chairlift. The vertical drop to the base of the Ridge at 1605m is 360m. Today the Blue Cow resort is serviced by 14 ski lifts and significant snowmaking over an area serviced by six lifts.