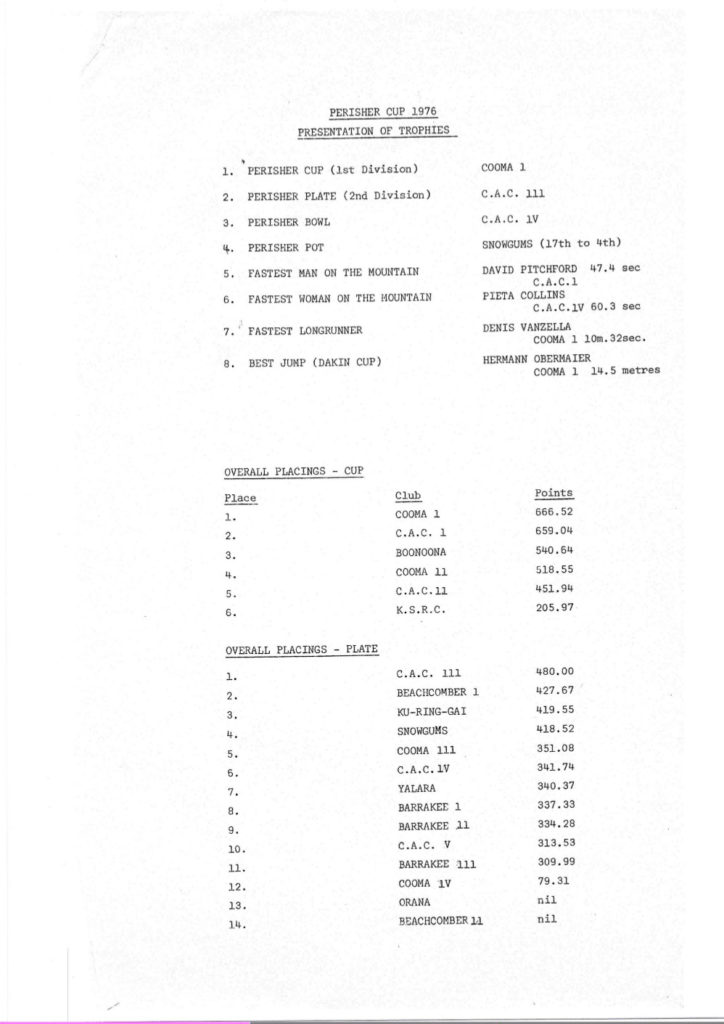 The 1976 Perisher Cup competition was held over the long weekend in October and, despite the promise (fulfilled) of dismal weather, 20 teams competed in the traditional spirit.

The Perisher Zone executive are most grateful for the assistance received from many helpers, without whom this popular event could not be held. Especial thanks are due to Doug Stewart (Boonona) for the use of radio equipment and watches, Stewart Wallis (Perisher/Smiggins Ski Racing Club, and Barrakee) for equipment and technical help), Keith Line (Rock Creek) for time recording and organisation of trophies. Chris Randall and Kore Grunnsund (Cooma), together with many helpers, under trying conditions obliged by setting the longrun course and preparing the jump. The Company (K.A.R.) were responsible for arranging the slalom course and the Ski School Director, Herman Muckenschnabl, obliged by setting a most interesting course from the end of Back Perisher down into Sun Valley.

The slalom on Saturday was held in good weather but unfortunately rain set in on Saturday night and/but washed out Sunday’s events. As it was, the longrun start was delayed until 11.30 a.m. and the jump until 3 p.m. — and the latter event restricted to the Cup teams owing to insufficient time and poor conditions. Consequently, the Plate for this year was decided over two events only — but by popular request it will be back to normal next year. The winner of the Perisher Cup was Cooma, followed closely by C.A.C.l and Boonona. Cooma and Canberra have been winning this event alternately for some years now and it is good to see the progress of Boonona (last year’s Plate winner). With a concentrated effort on their langlauf technique it could make for keen competition next year.

The Plate was won by C.A.C.111, closely followed by Beachcomber who look good things for next year’s Plate. C.A.C.’s womens team won the new Perisher Bowl trophy uncontested. What about it, girls! How about starting training now for a takeover in 1977.

The coveted Pot was handed over to Snowgums who improved from 17th to 4th to win at a trot. As well as some fine individual wins, as indicated in the results sheets, some excellent all-round performances were recorded by David Pitchford, Hermann Obermaier, Ron Brent, and the perennial Kore Grunnsund. David’s involvement in nordic events this year has certainly developed him into the complete skier. Veterans Ted Fisch and Jake Zweifel are performing as well as ever in Division 1 just at an age when many skiers are hanging up their boots. Interesting to note that Jake Zweifel and Len Harrison raced in the very first Perisher Cup event held in 1953.

Finally, congratulations are due to two individuals displaying the original Perisher Cup spirit. Keith Line, no youngster or lightweight, proved too heavy for the snow bridging the creek behind Revellers and took a swim en route to Pretty Valley for the longrun course. Undeterred, he returned to his lodge, changed and climbed up to complete his recording duties. If there was a trophy for heart, Adele Perrin would surely win. After badly injuring her shoulder in Saturday’s slalom, she completed the longrun course in the wet with her arm and shoulder strapped up. I am sure her team were most appreciative and we hope that she is now on the mend. Here’s hoping for a successful 1977 event. 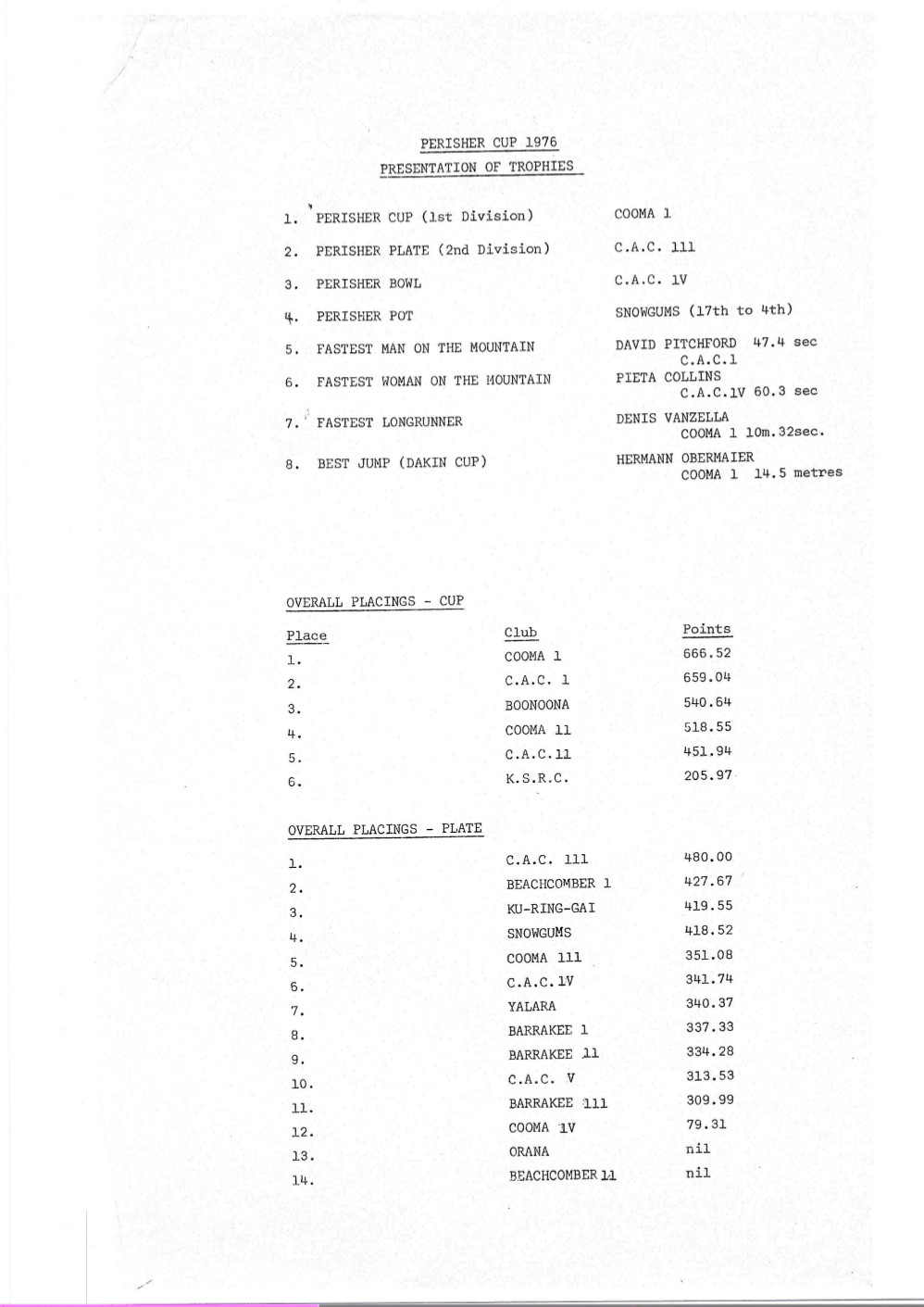 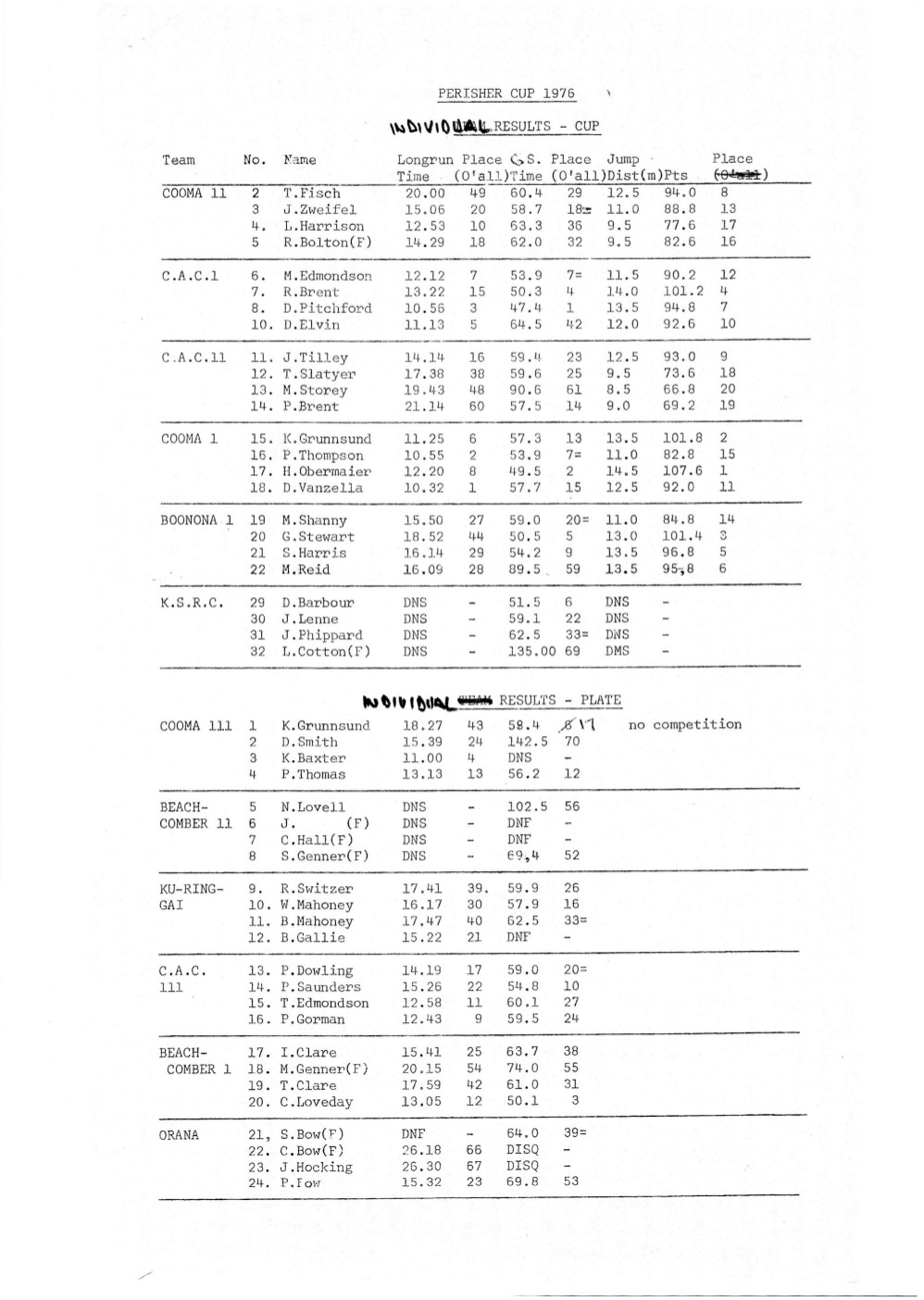