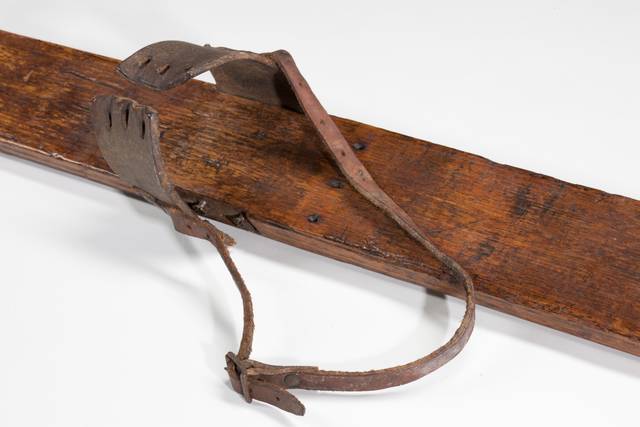 Most skis used in Australian ski resorts today are overwhelmingly imported from North America and Europe.  However, prior to post-war globalisation and the development of light-weight synthetic laminates, most skis were crafted in Australia from local timbers.

Early skis were generally carved from a single piece of wood, the properties of which included a durable straight grained timber (preferably light) that did not warp or splinter when worked with a rasp and treated with a preservative, but which could also be bent at the tip and maintain its shape when cured.

The first skis used in Kiandra were crafted from the straightest and tallest timber in the Snowy Mountains, Alpine Ash (Eucalyptus delegatensis).  Early reports made reference to ‘snow shoes’ being made from the local Mountain Ash, but it is likely this nomenclature was used in a general sense and did not refer to the true Mountain Ash (Eucalyptus regnans) that grows on the lower slopes in the Victorian  highlands.  There is nothing to suggest that wood other than Alpine Ash was the primary source of timber for making skis in those early years around Kiandra, however, it is possible that non-local wood from planks and panels of discarded crates, broken carts and housing material may have also been used.  Both Alpine Ash and Mountain Ash were available to those crafting their first skis further south.

As interest in snowsports grew and people started to invest more time preparing for their skiing adventure, different timbers were utilised in the manufacture of skis, often by individuals who wanted the reward of skiing on their own hand-made creations.  The motivation for some was also the cost of importing skis from Europe and the limited availability of skis in Australia.  Some people also imported wood from overseas to make skis.

The following list of native timber species from which skis are known to have been carved has been collected from the literature, oral histories and from skis in museums and collections.  However, if you know of skis being made from any other native timber, please contact the PHS to share your knowledge.  We can place this information on the PHS website.  Any stories that may accompany hand-crafted skis are also welcome.