Hans Zollinger – Zurich to Cooma in 121 hours and 5 minutes 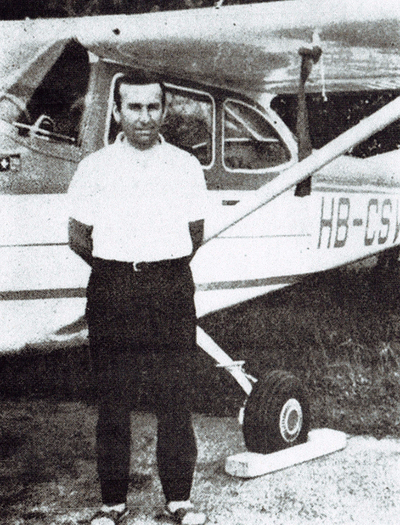 In May, 1970, Hans Zollinger – proprietor of Hans Oversnow – set out to fly from Zurich to Cooma.

Skiing attracts a fascinating range of people, very often their stories involve personal successes of determination and are enthralling.  Hans is one of these people and he has written the following account of the journey.

My intention was to join the air race from London to Sydney. For this I needed a Mooney M 20, but my finance were very limited. So I had to settle for a Cessna 172 which was built in Reims equipped with a six cly. continental R.R. 145 HP. engine. 600 T.T. By this time the air race was well on the way.

I was very anxious to leave on my planned trip in Cessna 172-HB-CSV Zurich to Cooma in Australia. I had been waiting for one month for clear weather. Finally I was told by the met. office the weather was clear for the next three hours on 4th May so I quickly packed up and took off at 15.45 local time with a heading for Florence in Italy. The takeoff in Zurich Airport was very exiting. I was caught in a vortex of a DC 9 which took off before me. “Nearly “ended upside down. To make matters worse air traffic control in Zurich made me divert away from my planed route, because the Swiss Military were practicing in this area. ( Artillery)

I had to climb to L 125 to clear the clouds–it was a strange feeling the first time alone in a Cessna flying to Australia, strange getting used to the instruments, too; it kept me busy for a while. By the time I was over Florence not good enough for VFR. (Fog) The visibility was so poor that I had to divert so I took the alternate Bologna which was cut of the hills – after a bit of a struggle. I reached Bologne just before last light. A glass of Milk, a cake, and a good old-fashioned bath finished the day off. A rather exiting first day.

Next day found me refueling and heading for Brindisi. Visibility was still very poor with dust haze all the way. I had to rely on the ADF and eventually landed in Brindisi at lunchtime. I tried to make it to Thessaloniki but did not get past the planning stage as the weather forecast said strong head winds and low clouds. This would be too risky for a sea crossing to Greece! Instead I had a good afternoon’s sleep and then watched the noisy Italian road traffic. Next day I arrived at the Airport 10 min. before 9 o’clock to refuel the plane, checking the fuelbill, I realised they charged me double, which I refused to pay. The fuelman said: 10 min. before 9 is overtime, now the argument started. The first time in my live I got to know “southern Italian temper”! I paid him in the normal amount in liras. “Take it or leave it”. I was told not to come back here again, which I gladly agreed.

Morning found improved weather so I took off for Greece; for the first time there was no turbulence with fair visibility even though there was some cloud, and I reached Thessaloniki without any problems. On arrival I was greeted by two Swiss ‘copter pilots – they were working with a helicopter on an off-shore oil rig. I stayed with them at the same hotel, that way I got away a bit cheaper on the “expense account”! Morning came and it was time to leave for Istanbul. This took two hours – a straightforward and uneventful trip.

Refueling in Istanbul was very interesting. One man with the ladder an other one rolled the fuel-drum, the third man carried the pump!! All of them expected to be paid. I paid the normal amount nothing else. I told them if they don’t like it send the bill to my Australian address. After refueling, customs and immigration, everything in order, I took off for Ankara, the capital city of Turkey. On this section, I had to divert a few times because of rain storms and turbulence, and eventually had to spend the next day in Ankara as well because of bad weather. On the third day, skies were clear and blue so I set off for Elazig, when I landed , I found that I did not have a clearance to land – too bad about that – but I did not have one to leave either! I filled in the time working in the control tower while the chaps went out and played a sort of volleyball.

Without that aid flying would be rather dangerous, as it would mean flying below clouds 500 feet or less above the ground and full of turbulence. I arrived in Djakarta in the afternoon to find the, by now, familiar paper war–forms to fill in, signatures etc., till the ball-point pen ran hot! Airport officials looked after me very well, took me to a very nice hotel–the Bali Hotel–I think it es the nicest place I stayed in and not even expensive. The whole place was full of paintings (top-less and others) masks, shells, carvings, and an Aquarium full of fish and ducks. The temperature in Indonesia is not bad but the humidity exists, so that’s why it is always raining. Flying here without carby heat is just about impossible and the motor would cough sometimes terribly. Early morning is still the best time to fly so I would try to reach Bali.

Well, the best of plans go astray. Departed Djakarta for Surabaja in sunshine tried to follow the coast, but the weather got worse pushing me more towards Borneo. Calling Djakarta: reply! Heavy thunderstorm activity. Could not return to Djakarta. In the mean time one tank was empty and I was somewhere over the sea. It got very critical I had to find the coast. That meant flying under the clouds 50 feet over the sea in pouring rain forward visibility was nil, later I found some fishing boats down below. So the coast could not be to far away. Lucky the rain stopped near the coast, but now where was I? Flying a few km. east., then turn and flying west I found Semarang. Made contact with the control tower, and landed safely without much fuel left! I took the rest of the day off to get my brain working again.

After an overnight stop I made for Bali and landed at noon and gave myself the afternoon off. After refueling I took the opportunity of seeing the town and the people and I stayed in a cheap hotel from where I could make a tour om a motor bike. I visited a so-called Monkey Dance which is more or less local tradition. the next day off to Dili in Portuguese Timor.

On this section the weather was good but a 20kt. head wind, which is just about normal for this area, kept me back. I had to make two unscheduled stops for petrol. the second one was rather a tricky one – it was on to a grass strip which runs up hill. I know now how to handle those grass strips – I think I remember a faulty “spark plug”, too! I stayed in a nice hotel in Dili where the food was good: I had had a hard day so it was early to bed before tackling that bit across the water to Darwin.

I departed Dili in bright sunshine and hopped across to Bau Cau where the tanks had to be topped up. Also here I had difficulty obtaining a weather forecast and flight plan–I think the officials had never heard of such a thing. To my luck the regular Fokker from Darwin arrived, and with the help of the pilots I got the flight plan to Darwin via HF. I took off ad climbed to L 95 where I had a head wind of 10 kts. After 4 hours flying in excellent conditions I spotted Melville Island some miles out from Darwin. Australia I reached after 4.35 minutes flying with a head wind and not much petrol left. Darwin to Alice Springs was the next leg–I had to follow the road all the way according to DCA rules.

Alice Springs – Oodnadatta – Leigh Creek follow the railway line. In Oodnadatta I had to abandon take-off because of water condensing in the fuel – lucky the strip was long enough for me to get back down. After a very turbulent flight across the Flinders Ranges. I landed in Broken Hill only to find one plug lead not functioning any more.

The following day in beautiful sunshine, plus a bit of a tail wind, I took off on the final leg to Cooma, stopping for fuel in Griffith. Cooma weather was as usual sunny with a little wind and I tied the Cessna down, unloaded and headed for Jindabyne and work.

A trip I have always wanted to do and one I shall not forget in a hurry! For future flights I would recommend a fuel carnet is a must and long range tanks would be an advantage–you are stretching your luck sometimes without these.

The whole trip took 121 hours 5 minutes flying time and I used 745 gallons of fuel, which ranged in price from 39 cents in Broken Hill to about 80 cents equivalent in Turkey, Iran and Burma.

Many thanks again to the members of the Singapore Flying Club.