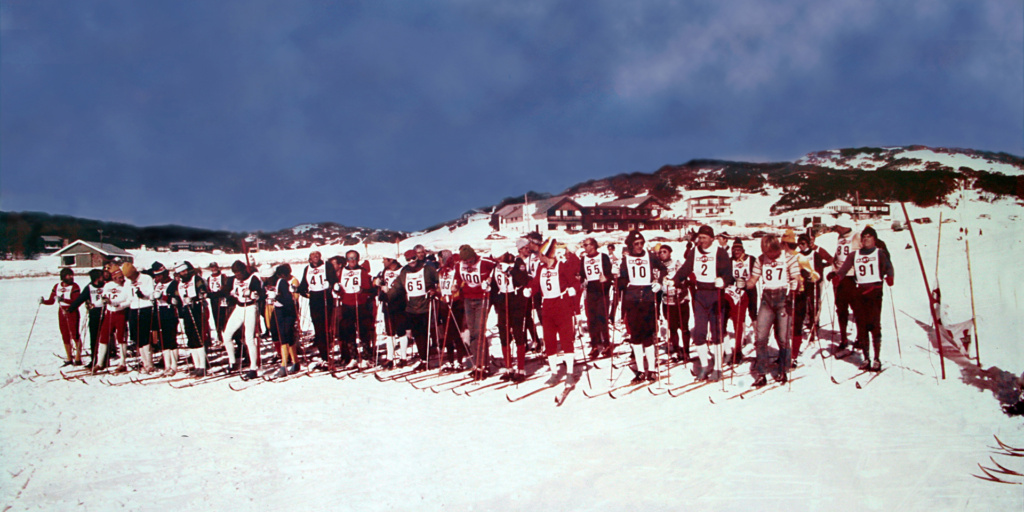 Start of the KAC Martini Race in Perisher Valley 1974

The KAC is one of the largest cross-country ski races in NSW. The race route, from Perisher Valley to Charlotte Pass Village, traverses 8km of gently undulating terrain through magnificent scenery.

In 1972 Ross Martin wrote to the Club Captain of Kosciusko Alpine Club, Geoff Nott, suggesting that the club hold an open cross-country race to start at Perisher Valley and finish at the Kosciusko Chalet.

In 1988 the Bicentennial KAC Martini attracted 736 entries and 693 finishers.

The race follows the Summit Road from Perisher to Spencer’s Creek, then turns left around Sugarloaf and along the valley to the Chalet at Charlotte Pass. In 1973 the only skiable snow could be found at the top of the Perisher T-Bars, so over 150 racers and officials were transported in open trucks to Perisher for the race. In 1981, sheet ice on the steep run down to Bett’s Creek caused many bad falls and some severe injuries. In 1982, another poor snow year, the race began near Bett’s Creek and competitors skied along a narrow track of snow beside the road. One of the shortest races was in 1998 when the race started near the Spencer’s Creek bridge. In 2003 torrential rain resulted in Spencer’s Creek breaking its banks at the base of the T bar and turning into a 7 meter wide torrent. That year the race started at Betts Creek and finished at the top of Charlotte Pass driveway, with competitors then having to walk down the hill and through the flood to the KAC lodge.

From a report in the KAC Bulletin September 2006 the race that year started at Betts Creek due to lack of snow on the road in Perisher. Perisher Blue helped by providing transport to the Gap for those aged over 75. But there was still some walking to be done and few missed the start. The track crossed Spencer’s Creek on a snow bridge, with Graeme Gibson, the ever helpful Manager of Alpenhof, standing by with a ladder and ropes in case anyone fell in. In 2015 blizzard conditions led to the race being moved to the groomed cross-country trails in Perisher

The race has attracted some international competitors. In 1980 the winner was United States racer Bill Koch, the silver medallist in the 1980 Olympic Games and World Langlauf Cup winner in 1982-3. In 1981 Japanese racers filled the first seven places. In 1978 and 1982 top Norwegian coaches entered the race.

The race has seen many changes over the years. Martini and Rossi sponsored the event for about 15 years, with Solar Springs Health Retreat sponsoring from 2003 for a number of years. The race subsequently became known as “The KAC”.

Initially there was no distinction between competitors using the “Classical” technique (diagonal stride) and those using the “Freestyle” or skating technique. In 2009 Classic skiers were able to compete in their own section first time, a decision enthusiastically received by all 114 entrants in that section.

The race is traditionally held on the Wednesday of what is now known as “cross-country week”. Organisation of the race is a huge task involving many volunteers who record entries, distribute bibs and timing devices, man checkpoints along the way, provide drink and feeding stations and calculate the winners in the many divisions, and organise prizes.

Apart from volunteers from many clubs, Perisher Resort, the Perisher Volunteer Ski Patrol, KAC lodge managers, the Kosciuszko Chalet and the National Parks and Wildlife Service have all contributed to the organisation and safety of the annual event. KAC Members Geoff Nott and Carl Bongers were among the early organisers who devoted much time to the event. Carl Melvey (Boonoona) acted as Technical Delegate for many years.