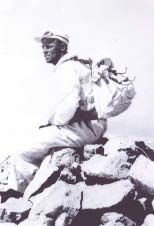 Johnnie Abbottsmith, ‘Abbo’ to his friends, was born in 1918.  The son of a surveyor, he first came to the Snowy Mountains in his teens, working as geologist’s offsider for a gold mining company around Cooma.

He then went on to work at the Hotel Kosciusko, first as a grease monkey in the engine room and then as a ski instructor.  Between winters, the young adventurer made a couple of trips across the Pacific with the Niagara Steamship Company and worked with a mining company in Canada’s remote north-east.

With the outbreak of war in 1939, he joined the AIF and, as a member of the famed ‘Rats of Tobruk’, saw action in North Africa and the Middle East.  He also had a stint as sergeant in charge of equipment and ski instructor with Colonel Bob Savage’s ski troops in the mountains in Lebanon.  In 1942 he was badly wounded at El Alamein and shipped back to Sydney – “unfit for combat”.

However, this did not stop Johnnie signing on with the US Small Ships Service operating in the islands north of Australia.

In 1946, back as a ski instructor at the Hotel Kosciusko, he met and married Phyllis (Phyl) Taylor, a fellow staff member.  The Abbottsmith’s first home was Betts Camp, where they lived while Johnnie was employed by the Kosciusko State Park to install radios in mountain huts.

The next year, inspired by several meetings with Antarctic explorer Sir Douglas Mawson, Johnnie signed on as a diesel mechanic with the Australian Antarctic Research Expedition (ANARE) to establish a base on Heard Island.  As a member of the 14 man team that spent just over a year on the island, he also took part in exploration, mapping, geological and wildlife studies, and carried out weather observations.

The ingenious snow melter he designed and constructed was still in use in 1953.  To mark his contributions to the expedition, Mawson named a glacier on the west side of the island the Abbottsmith Glacier.

Back in the mountains, Johnnie worked for the Water and Irrigation Commission measuring river flows and heights.  This experience, coupled with his knowledge of the area and weather work on Heard Island, made him the ideal choice to establish and operate the Snowy Mountains Authority (SMA) Weather Station at Spencer’s Creek.  While at Spencer’s Creek he had a dog team to help him get around in the winter and he built a wind-operated generator to supply some power to the building, probably the first alternative power produced by the SMA.

He also had some fun with the guests at the nearby Chalet at Charlotte Pass.  Not only did he carve out a giant’s path down the slope in front of the Chalet by making two parallel runs on one ski, two or three metres apart, he would often be seen to shoot over Pulpit Rock after making snow depth readings at the Pass, stocks under one arm and making entries in his notebook as he skied down the slope.  As John Davis says in his memoir, Johnnie was “not too bad on skis, being on the state team…on a couple of occasions”.

By 1952 it was time for the Abbottsmith family to leave the isolation of Spencer’s Creek and move to Smiggin Holes. With four children, access to schools and other services was becoming more important.  Johnnie built a house at Smiggins, left the SMA and built the first Perisher-Smiggins ski lift, which commenced operation in August 1952 and ran until 1959.  The sled dogs moved to Smiggins with the family and, with this all-breed team, Johnnie started the first Smiggin Holes to Perisher transport service.  As the number of lodges in Perisher grew, he acquired an ex-Chalet snowmobile, pensioned off the dogs and in 1953 started the area’s first motorized over-snow transport, which he ran until 1956.

In 1955, Johnnie had built and was experimenting with a portable rope tow at various sites in Perisher Valley.  That winter, for the first time, he successfully hauled a skier up a hill in Perisher by mechanical means, other than by snowmobile.  The following year he built the Village Tow in the Telemark Basin and, with Sverre Kaaten, the Tow Hut Tow (later known as the Big Tow) at the northern end of the valley.  Both tows had lots of problems in the heavy winter of 1956 but ran fairly smoothly the following year.

Members of the early lodges in Perisher Valley – Snow Revellers, Telemark, Orana, University, CSIRO, Cooma, Warrugang, Kandahar and Sydney – came to rely on ‘Abbo’ for help with construction and supply of firewood during the summer.

His ingenuity and pragmatism solved many problems in the then ’isolated’ valley.

Not only a pioneer in the areas of over-snow transport and ski lifts, Johnnie also devised a system for providing weather reports from the snowfields.  Each Monday, he took a roll of film showing snow cover and conditions at The Chalet, Perisher and Smiggins, delivered it to the post office at the Hotel Kosciusko and posted it to Dick Gilkes at Sydney’s first ski shop.  Dick had the film processed and displayed the pictures before the next weekend.

With the growing size and complexity of the Perisher- Smiggins area, Johnnie decided to leave Smiggins and establish the Snowline Caravan Park, first at the Creel and later at the edge of the new Lake Jindabyne at the junction of the Kosciusko Road and the Alpine Way.

To keep some connection with the snow, he acquired the agency for Evinrude snow cruisers and in 1965 made a skidoo run on poor snow from Kiandra to Thredbo in eight hours, a record that possibly will not be broken.

Johnnie eventually retired, cutting his ties completely with the mountains.  He and Phyl roamed the country from Coober Pedy to Cape York and had many adventures, such as mining for opals at Andamooka and being part of the Bi-Centennial Camel Race from Alice Springs to the Gold Coast.

Although Johnnie Abbottsmith, truly a mountain legend, died in 1989, the Abbottsmith name lives on in the mountains.  Phyl now lives in Queanbeyan, daughter Fay (Pendergast) and family in Jindabyne, Garry also Jindabyne and Diane (Hampshire) in Bombala.

Based on John Davis’ memoir titled “A History of the Early Development of Perisher- Smiggins“, with some additional information from ANARE and the National Library of Australia.