Life Above the Snowline – Uwe and Gil Boehm 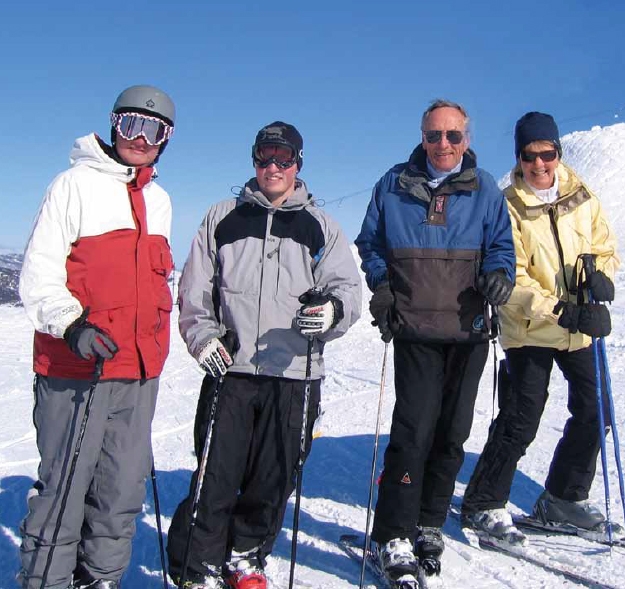 Another story of life and work in Perisher.

Uwe arrived from Germany in April 1960 and, after a year in Mt Isa, began travelling around Australia on his BMW 500 motor cycle. He rode into Perisher Valley in  ctober 1961, noticed a new timber lodge called Eiger Chalet, and continued up to Charlotte Pass where he saw a ‘D’ (Deutchland) on a small VW beetle. Feeling a little homesick, he approached the family playing nearby and there began Uwe’s life in the Snowy Mountains. Gunter (Garry) Fischer, owner and builder of Eiger, offered him lodging and some work.

Uwe began his working life in Perisher as a labourer at Eiger and later at The Man from Snowy River Hotel, Marritz and Corroboree Lodge. During the 1960s, Uwe worked as a ski instructor for Perisher as well as waiter/general hand at Eiger in the evenings. In summer he instructed in St Moritz, Switzerland, which enabled him to visit his family in Germany.

In 1972, Uwe took on the management of the White Spider Restaurant, which had been operating for only one season. With no experience as a chef, and little in a restaurant, he amazingly built the White Spider into the popular and well known restaurant it remains to this day.

In 1973 Gil (Lethbridge) obtained a position as a housemaid in the Eiger Chalet, having just returned from 3 years in Europe. One year had been in Zurich, Switzerland, so the name ‘Eiger’ had attracted her. With little or no experience in hospitality (she had been a teacher), she was quite petrified of Uwe, the ‘boss’ in the White Spider, who would follow the girls around to make sure they set the tables correctly.

This fear was quickly overcome, however, and Uwe and Gil became friends, eventually marrying in 1980. From 1974 till 1978 Gil lived in Canberra (and later Cooma) working as a teacher during the week and in the lodge and restaurant at weekends.

In 1979 Uwe became a one-third partner in the Eiger Chalet, and Uwe and Gil managed the lodge from that year until 2006, when they sold their share in Eiger.
After 27 years as managers, they have wonderful memories of and friendships with many loyal guests and staff.

Uwe and Gil have two sons, Kent, born in 1981 and Byron, born in 1986. Both boys grew up with the beautiful Kosciuszko National Park as their backyard, and both still love the snow and Perisher.

In 2011 Eiger celebrated its 50th birthday. At the June celebration, Uwe and Gil were delighted to meet again many of the long time guests of Eiger. One of them, now 85, began skiing and staying at Eiger when she was 39 years old.

The Boehms are regularly seen in Perisher. Gil worked as a Mountain Host for two seasons and works each year at the Snowy Mountains of Music Festival. She says, “it’s very hard to stop the people contact and after so many years I still love that.”

Skiing is still a very big part of their lives. Uwe has also built himself a small aircraft in which he flies over the snowfields checking out snow conditions from the air!

The Boehms (left to right): Byron, Kent, Uwe and Gil, still enjoying Perisher after all these years (Boehm collection).