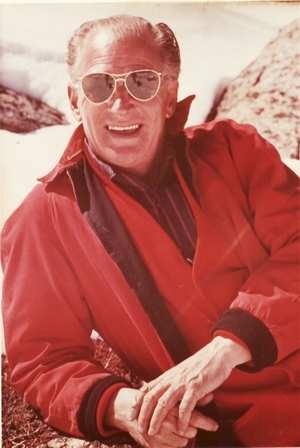 Ken Murray, known to all as “KG” was the initial major developer of Perisher Valley.  His company K.G. Murray Publishing Company from 1959 until 1973 built (except for the North Perisher T-bar) and controlled, both ski-lifts and hotels, operated the ski school, established retail outlets and initially held responsibility for all liquor sales.  The company eventually provided ski patrol, medical services and slope grooming.  In return for the supply of these facilities and the fact that all the investment was on a non-freehold land, the Kosciusko State Park Trust granted the company a license as sole provider of these services for a period of time.

Ken Murray was an active skier and, as was the norm, cut his teeth at Charlotte Pass.  In 1957 with signs of Perisher becoming a ski village and knowing of his friends, Sverre Kaaten and Johnny Abbottsmith’s efforts to establish uphill transport, he built Edelweiss Ski Lodge.  Both KG and Mrs Murray spent lots of time in Perisher Valley during the winter of 1957.

In 1959 Ken Murray started the Valley’s major development with the building of the first T-Bar and the Sundeck Hotel.  Owning a ski resort and being a magazine publisher, the first issue of Ski Australia May 1961 hit the streets or should we say snow.

Comments, corrections and additions are welcome and sought after.