The All Denominational Church History 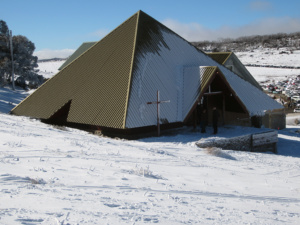 Note: Links to Keith Line’s Memoirs, and the Form and Order of Service
for the dedication of the Alpine Church can be found at the bottom of this page.

HISTORY OF THE ALL DENOMINATIONAL ALPINE CHURCH

The project to build an All Denominational Alpine church and to incorporate a Community Centre was first considered by Keith Line and Neville Gare (Superintendent of the K.S.P.T.) and was for one church to serve all the needs for people of all faiths.

Permissive occupancy was granted for Keith Line on the proposed site opposite the skiing slopes. Before sufficient funds has been raised in order to commence a building, approaches were made by the R.C. Church to build on the site chosen. The Roman Catholic Church was erected on this site in 1964/65.

The present site for the Alpine Church was chosen in 1965. In 1964 we investigated the possibility of moving the historical Anglican Church at Jindabyne to Perisher and then design a building to incorporate it’s structure, before the proposed reservoir engulfed old Jindabyne. However, the material of random granite from which the church was mainly constructed did not allow for economical removal.

Mr. M. T. Gregory, architect, and later Trustee of the Alpine church was asked to design a building of a construction which volunteers could build.

Initial funds were raised through many efforts: appeals to Perisher Ski Clubs; individuals, Ski Art Union (prizes being donated by retail ski shops); raffles, games nights, wine tastings, and various other functions held in Perisher and Sydney. From 1963 to 1967 sufficient funds were collected to start in December 1967.

A small group of volunteers – some living locally and others who travelled from Sydney at weekends and, in some instances, devoting their holidays – have worked on this project. They have come from all walks of life, and are of various denominations and nationalities before becoming Australian citizens. Of necessity, we have had to employ and pay some skilled labour

The Alpine church is administered by five trustees:

It will be dedicated as a Church for Divine Worship according to the rites of several churches and by such religious orders as approved by the trustees, and the Trustees may permit the use of the Church for educational and community purposes and for public and other meetings and services.

The Church’s internal measurement is 40ft. square and it is built on the principle of an isosceles triangle. Floor to apex is 34ft. A bell is suspended in the apex. Internal and external timbers are oil stained Tasmanian alpine ash and all internal roofing beams are oregon, the timber framing is exposed through which the yellow roofing is visible.

The foundations are clad with Kosciusko granite excavated from the Island Bend tunnel project. Triangular cuts in the roof eaves above the windows provide for ever changing icicle formations during winter.

The altar is constructed also of granite surmounted with a carved timber top: the Font was carved from a weathered log found in the Snowy River; the Pulpit and Lectern were made and donated by a Perisher skier.

Although the Church was far from completion, it’s first christening was celebrated on the 12th July, 1969 for Clinton, son of Mr and Mrs Owen Nott of Kokopo, New Guinea. The first marriage was celebrated on 23rd May, 1970 between Mr. Kurt Brulisauer and Miss Diana Robinson, both residents of Perisher. Kurt has been an active volunteer. The christening of the first child, Peter, will be in the Alpine Church.

The Bell which is suspended in the Church and is recorded in the history of New Guinea, was cast in Germany in 1912; biblical figures are carved thereon. It was used for many years in the Church of the Vunapope Catholic Mission, Kokopo, New Guinea, at that time the German capital of New Guinea until the First World War. It remained in use at the Mission until the occupation by the Japanese during the Second World War. They utilised the Bell as a means of communication. With the recapture of New Britain, most of the buildings of the Vunapope Mission were destroyed. The Bell was found several years later in the sea of Kokopo. At that time the Anglican Church of the Good Shepherd was being erected and the Bell was installed in the belfry. A short time later the belfry was destroyed by an earth tremor (guria). It was then hung on the verandah of the Kokopo Sports Club and used to signal tea breaks in cricket matches. Keith Line, who made frequent trips to New Guinea, was seeking a bell and mentioned the purpose to the Committee of the Club. After discussion, it was donated to the Alpine Church.

The Form and Order of Service for the Alpine Church.
Download the PDF (1.2mb)