The Crackenback or Thredbo 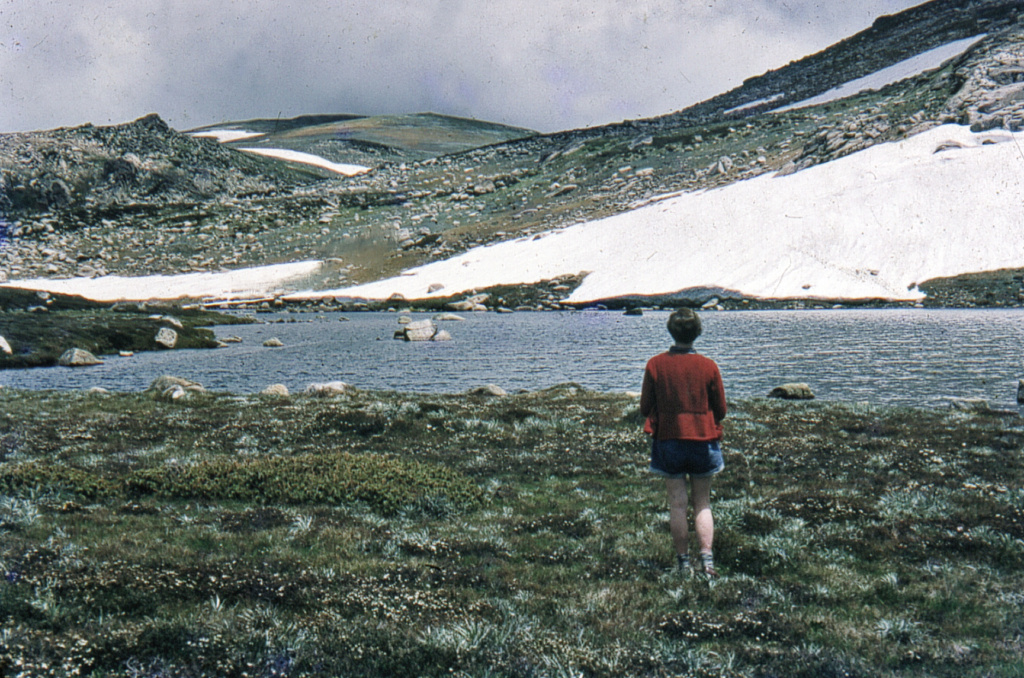 By “Samford” (G.W. Kenyon)
Article from INTO THE BLUE
Coast and Mountain Walkers of NSW No 26, July 1943

One blazing hot afternoon two cattlemen, sitting crosslegged on the cool verandah of their shack, were astonished to see two footsloggers raising the dust on the Wollondibby Road. We may forgive them, however, for not knowing that there are folk, even clubs of them, who like to walk and even carry their house and a week’s supply of food on their back, for in cattle country no man walks unless he has lost his horse. The specks enlarged until two perspiring red faces, escorted by a cloud of flies happy over a change from the eternal cattle, looked over the gate. The faces were offered shade and tea, but a dusty voice merely wanted to know the short cut to the river, and how much longer it was than the long way.

Long white roads are so depressing as to give rise to evil thoughts such as wishing that one had a motor car. Thus it was a relief to turn on to the track and set to work on the ridges. The route wandered aimlessly, but one can forgive even a track for being in no hurry in this green country rich in grass from regular rains and winter snow; and a rabbits’ Paradise judging from the hundreds of bobbing white tails.

Boots were removed for crossing the Little Thredbo which noisily scampered over the boulders, seeming excited over the nearness of his union with his big brother. In an evening warmed and stilled by an approaching storm, we thankfully dropped packs on to a soft patch under some snow gums on the Thredbo bank. Nearly two thousand feet above were the Rams Head Peaks, tipped by black swirling clouds which clutched at the granite crags. We secured the tend hard down with extra wooden pegs driven through loops of the wire pegs at an angle, closed up the flaps and prepared for what the gods of alpine weather were about to serve for the evening.

The Performance opened with a tympanic toll along the Ram’s Head, followed by a flood of light and without further introduction the storm orchestra in tutti; bass drum and cymbals in tumultuous announcements; a fury of strings as the rain and wind lashed at the trees and our straining tent; a multitude of trumpets echoing the thunder in the lower gorge. The drenched and worn rocks stood out clearly in the almost continuous light. Nothing alive was out in this weather, when the forces of Nature took control of the Crackenback country. Its energy abated towards morning when we looked out on to a grey subdued world, the mists still swirling over the rocks and snow drifts far overhead. Owing to the more compact grass of the lower alps, we did not have a flood in the floor of our tent. In the higher country the grass tufts are separated by earth channels along which the water races, and camping in a thunderstorm is a nerve-racking affair.

With the faithful tend tucked away, a start was made up the river, through the thick and almost tangled snow gums. It has a rough bank, this young and energetic stream which leaps and sparkles over the boulders and has only short rests in its few quiet pools. The cattle too are taken up here, but their route must be well back from the water’s edge which is no place to take stock. A great trout stream too, rivaling the Gungarlin and its neighbor, the Mowamba (with whom it begins its career south of Dead Horse Gap.) There are a few small open flats, one with a tumbledown shack – a home for foxes now.

A lively little creek crossed the flat here with the usual boulders inviting ‘rock hopping’. Hitching up my pack and gripping firmly the billy of beans which were soaking in preparation for the evening meal, I sprang on to the first boulder, then the second, then the third but only for an instant as hobnails failed to grip. With a sickening splosh down went billy and Billy into the thick black mud. The lid flew off the former billy and shining beans rolled gracefully into the mire or made a quick journey to the Thredbo. Ibelieve that this looked very funny.

A camp was made on a broad high flat opposite Gore’s Ridge, some four miles below Friday Flat. From the tent one could look right down the Thredbo, which, notwithstanding its numerous twists and turn, generally follows an amazingly straight course, with the Ram’s Head range running parallel to it. In the evening and following morning the range was bathed in lights of indescribable beauty.

In the early morning the icy stream was crossed – an agonizing process requiring many minutes of frantic leaping and slapping to restore life to our lower limbs, and persuade them to take books and socks ready for the climb up. The lower slopes of the ridge were covered in a forest of tall mountain ash and among them we saw two foxes, or maybe a fox and a vixen (an assumption which is the result of long experience in the bush). I tried to imitate the rabbit whistle which Tom used with great success during our ski trip to the Bogong, never failing to bring up at a gallop any fox within earshot. Our fox could not make up his mind over my version of a trapped bunny, but nevertheless it did not run away. Both of them strolled around at barely thirty yard’s distance without any evident concern. Higher up was a tangle of snow gums broken down by heavy snow, and which was a problem to negotiate. Beyond were soft grassy slopes covered in snow daisies which curved right up to the summit. A large snow drift had to be crossed before the final pull, from which we gazed enthralled at a view covering the Thredbo gorge, the great range which separates the Thredbo from the Mowamba, and the plains beyond Jindabyne. With reluctance we left the scene behind to walk over the soft wet alps towards Mt Stilwell, and passed the Chalet where we saw the husky dog team still in their yard and no doubt earnestly wishing for winter to come.

From the Kosciusko Summit, Hotham, Feathertop and Mt Bogong could be seen clearly each having large snow patches. The icy wind drove us around to Carruthers – with snow all along the route. Heavy scouring here indicated the danger of removing grass for track making where rain is heavy – one track was four foot deep! The Murray plains – yellow among the blue hills, were an enchanting sight. The Blue Lake had snow drifts down to the water’s edge.

Our footsteps were directed homeward down the Snowy to Pound’s Creek, and then across the Perisher and Blue Cow to Piper’s gap. A long road walk from there was shortened by a lift from some road workers in a utility truck, who were bound for the Creel to collect their pay. The last night was spent at Jindabyne – a glorious spot under great pines with the river and its spurwing plovers to charm our rest. 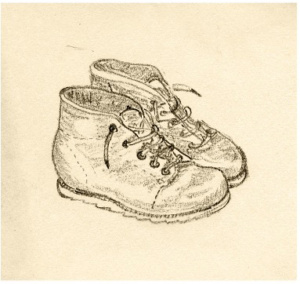