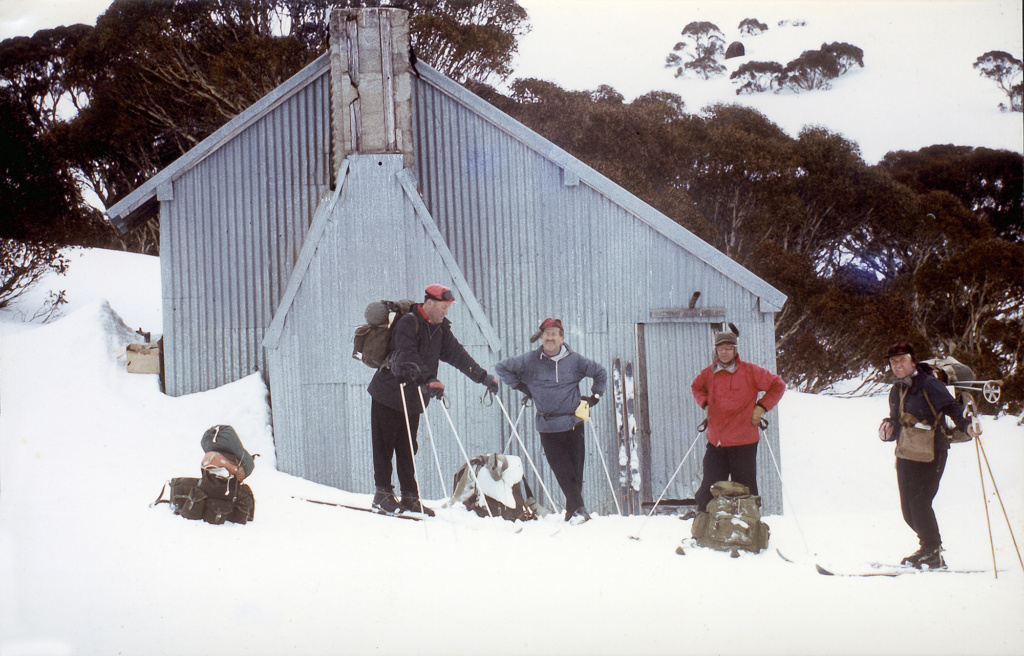 In 1962 six members of the Kosciusko Alpine Club agreed to spend a week each year ski touring. Mawson Hut was to be the base for this. About April each year the winter supplies were to be carried in and buried in a cache near the hut. Because of this the group was named the Squirrel Club, later the Exclusive Squirrel Club because there would be no additional members.

Neville Gare, Superintendent of the then Kosciusko State Park, was a good friend and supportive of our activities. He helped us in many ways and accompanied us on our summer trips to the cache. I think he also wanted to educate the Squirrels about Park preservation policies. He told us – “No Ratsak in Mawson” – these were broad toothed bush rats which are protected. On one occasion Neville accompanied us on a trip in April via the Snowy Plains – we could not use the Schlink Pass route because of snow. I had built a sledge, based on the design of Antarctic sledges where the joints are made of rawhide lashings to give greater flexibility over uneven surfaces. We carried the sledge with our supplies and articles for the repair and improvement of Mawson, including the library, from Kidmans Hut to Alpine Hut, where we stayed overnight. Next day the party carried the sledge and gear to the top of the Brassy. Because of the snow which covered the ground to the Valentine River, all supplies had to be loaded on the sledge and towed to Mawson, Neville being one of three on the tow ropes.

In 1965 Neville told us about the Park policy which would result in the removal of huts which the service could not maintain, and which were in any case incompatible with wilderness values. We had a conference with him that year at Mawson and proposed that the Squirrels would act as honorary caretakers of Mawson Hut and effect repairs to it so that it could remain as a refuge for walkers and skiers who may be in need of shelter in emergencies.

It was hoped that bushwalking clubs would follow this example for there were many other huts also in need of maintenance. To this proposition Neville gave his tacit approval, although official approval under Head Office policy could not be given. So for about five years the Squirrels carried out maintenance work on Mawson until 1970 when Squirrel activities ceased, after which the Kosciusko Huts Association was formed to continue the work on an organized basis. I made another sledge for Grey Mare which was despatched by rail to Cooma and Neville Gare transported it to Grey Mare on the fire trail from Round Mountain.

The Squirrels used Mawson as a base between 1962-1970 making many day trips to Jagungal, Grey Mare, Bulls Peaks and other places.

In 1982 four of the Squirrels walked to Mawson from the Schlink Pass Road accompanied by Beryl Kenyon and Ros Furse, on what proved to be their last visit. A large party of bushwalkers staying there were dumbfounded to witness the group of not so young and nondescript men arrive and announce their identity. The party apparently thought the story of the Squirrels was a mountain rumour. Their doubts were dispelled when the Squirrels dug up the cache of 1970 – some canned Beaujolais, tinned tongue and other luxuries. The hole was carefully re-turfed to its natural condition.

Note: Mawson Hut is situated in the Mt Jagungal area, in the northern part of the Kosciusko National Park