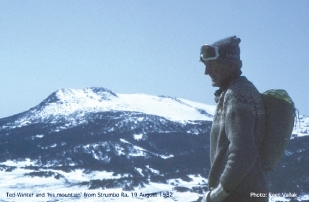 It was with regret that we note the passing of Ted Winter in 2009 – poet, athlete, high school teacher, bushman, a fierce advocate for the preservation of the Kosciuszko huts, a foundation member of Yeti Alpine Ski Club in Perisher Valley and a passionate tourer of the Snowy Mountains – on skis and on foot.

At the age of 100 years, Ted left an inspiring legacy of achievements and contributions to this country, including representing Australia in pole-vaulting at the Empire Games in Sydney in 1938 (an early version of the Commonwealth Games). With his extraordinary athletic prowess Ted loved the challenge of touring in the wildest storms, day and night, and traversing the hardest terrain.

Ted was always keen to impart his knowledge to younger and older folk alike, always wanting to share his passion and enthusiasm for the natural wonders of the Snowy Mountains and his skill in navigating with confidence through the mountains. Introduced to skiing in 1935, Ted was never a downhill skier, always championing cross-country skiing and touring and even making his own skis. Ted was instrumental in the planning for a lodge at Perisher Valley and in the summer of 1962/63 helped to construct Yeti Alpine Ski Club.

Skiing well into his mid-80s, Ted spent his latter years in a retirement village at Faulconbridge in the Blue Mountains – an area where he lived and explored for many years when he wasn’t traversing the Snowy Mountains.

Perhaps Ted Winter was best summed up by a fellow journeyman – Paddy Pallin:

’Lean as a greyhound, tough as a snow gum, the survivor of many a storm, Ted Winter probably knows the Snowy Mountains better than any other person.’